We have highly dedicated experts to assist you with your travel plan. We will make sure that your holiday will be exactly the way you want.

We are locals yet we understand the purpose behind your travel. We speak your language and we promise direct access to Nepal. You get the best and accurate information, value for your money and unmatched personalized service.

The political, commercial and cultural hub of Nepal is the first stop for the majority of visitors to the country. Once a separate kingdom in itself, it contains three fabled cities – Kathmandu, Patan and Bhaktapur. Out of ten UNESCO World Heritage Sites, seven cultural heritage sites are in Kathmandu Valley.

The history of the Valley begins with the Buddhist saint Manjushree who slashed a passage through the surrounding hills to drain out the primordial waters and make it inhabitable. Over the centuries, a refined urban civilization emerged, built on a unique synthesis of Hinduism and Buddhism. Kathmandu, the largest city in Nepal is situated at an altitude of 1,350m has many important sites to visit during your stay in Kathmandu. 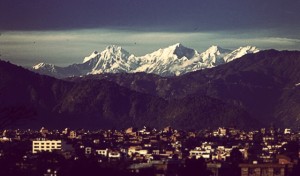 of the Living Goddess), Taleju temple, built between the 12th and 18th centuries, used to be the seat of the ancient Malla Kings of Kathmandu. An intriguing piece here is the 17h -century stone inscription set into the wall of the palace with writings in 15 languages. The Durbar Square, protected as a UNESCO World Heritage Site, is the social, religious and urban focal point of the city. Even to date, all the major state and social ceremonies, including the solemnization of coronations are performed in one of the courtyards in this complex. There are also museums inside the palace building. There is an entrance fee of Rs. 250 for foreign visitors. Your ticket to the Square entitles you to visit all the museums.

Walkabout. A colorful and enlightening walk that gives you a feel of Kathmandu starts at Rani Pokhari, the large pond at Jamal beside the clock tower (Ghanta Ghar). The first stretch of the diagonal street leading southwest from here is called Kamalachhi. It is lined with bicycles and garment stores and brings you to the stone-paved market square of Ason, where the Annapurna temple presides over the motley of spice, grain and oil shops. Keep on walking and you come to Kel Tole after passing shops overflowing with brass utensils. Further on is the junction of Indrachowk with the temple of Akash Bhairav occupying one side. Your next stop after threading your way through the street lined with cloth shops is the stone-paved plaza of Makhan, where the Taleju temple towers over a row of handicraft shops. Walk on through Durbar Square to the intersection of Maru where you are surrounded by temples of all shapes and sizes.

Swayambhu Stupa watches over the Valley from the top of a hillock on its western side just three kilometers west of the city center. The stupa is one of the holiest Buddhist sites in Nepal and its establishment is linked to the creation of the Kathmandu Valley out of a primordial lake. Swayambhu is also known as Samhengu and is listed as a World Heritage Site. It is also one of the oldest and glorious Buddhist shrines in the world which is said to be two thousand years. The four sides of the stupa is painted with the eyes of Lord Buddha and the temple is also known as the watchful eyes of Buddha. Entrance fee Rs. 200.

Balaju consists of a sprawling garden of stone water spouts, fish ponds, and a replica of the statue of Budhanilkantha. Situated below Nagarjun hill about 3 km northwest of the city center, Balaju is known for its bank of 22 stone water spouts (hiti) carved in the shape of sea-dragons during the 18th century. Devotees take ritual baths under the gush of water in Balaju, also known as Lhuti. This is also an ideal place for picnic and relaxation. There are many beautiful folk songs focused on the Balaju Water Garden.

Budhanilkantha is situated below Shivapuri hill at the northern end of the Valley. It is about 9 km from the city center. The hub of the temple complex is a pond in which lies a 5 meter (17 feet) long great stone figure of Hindu god Bishnu reclining on the coils of a cosmic serpent. The figure has been estimated to have been found buried in the ground in its original state more than thousand years ago. It is also known as Bhuijasi. Hindus throng to this sacred pilgrimage almost everyday to perform puja but a great number of worshippers can be seen in various festivals, especially on Haribodhini Ekadashi that falls between October/November, the day believed that the sleeping Lord Bishnu wakes up. 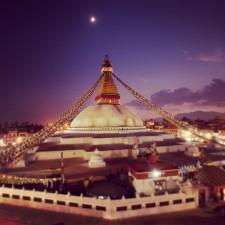 Bouddhanath Stupa lies about 6 km east of downtown Kathmandu and is the largest stupa in the Valley and one of the largest in the world. It looms 36 meters high and presents one of the most fascinating specimens of stupa design with hundreds of prayer wheels and 108 small images of Buddha all around. Just like the Swayambhunath, the stupa here is too has four sides with the watchful eyes of Lord Buddha. All the Buddhist throng to this stupa to take part in the sacred rituals during the Buddhist festivals.Bouddhanath, a World Heritage Site is also known as Khasti. There are more than 45 Buddhist monasteries in the area. Many have schools that teach young monks like those pictured here.

Changu Narayan Temple is situated on a ridge overlooking the Valley, about 12 km to the east of the city. It is dedicated to the Hindu God Bishnu – the Preserver. One of the finest and oldest specimens of pagoda architecture, the temple is embellished with exquisite wood and stone carvings and is said to be the oldest pagoda style temple in Nepal built sometime back in 323 A.D. The sacred complex is a World Heritage Site and offers a panoramic view of the surrounding at 125 meters. 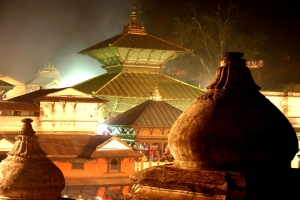 Pashupatinath Temple. One of the most sacred Hindu shrines in the world, Pashupatinath lies 5 km east from the city center. The richly-ornamented pagoda houses the sacred linga, or phallic symbol, of Lord Shiva as well as the noteworthy gold plated roofs and silver coated doors. This is the abode of God Shiva and is the holiest of all the Shiva shrines.

Religious pilgrims and sadhus, like the one pictured here, travel all the way from the remote areas of India to visit this sacred sight, especially during Shivaratri (the night of Shiva) that falls between February/March. Even though these devotees have denounced worldly possessions, each carries a Sadhu ID (identifications card) to freely cross over the border between India and Nepal.

Chronicles indicate Pashupatinath’s existence prior to 400 AD. Devotees can be seen taking ritual dips in the holy Bagmati river flowing beside the temple, also a World Heritage Site. The crematorium is just outside the temple and it is a dream of almost every Hindu to be cremated by the side of Pashupati Aryaghat after their death.

Kirtipur, (population 40, 378 – 2001 Census) a small town is situated on a ridge 6 km southwest of Kathmandu. The ancient township established in 1099 is a natural fortress and has a proud and courageous history. It was the first place to be attacked by Prithvi Narayan Shah in 1768. The Chilamchu stupa and the temple of Bagh Bhairav are major sights here. Kirtipur offers quaint streets lined with artistic houses and temple squares and great views of Kathmandu Valley. The people are known for their skill in building and weaving and other ancient loom. The oldest educational institute, Tribhuvan University is located in the bottom of the hill.

Dakshinkali and Chobhar. The temple of Dakshinkali is dedicated to one of the most important Hindu Goddess Kali and is one of the most popular places of worship in Kathmandu. Located 22 km from the city center on the southern rim of the Valley past Pharping village, the shrine is especially crowded on Tuesdays and Saturdays when animal sacrifices are offered to the deity. On the way back, stop at Chobhar, the famous gorge, just 8 km south west of Kathmandu. The narrow gash in the hills was made by Lord Manjushree to drain out the lake which once covered the Valley. A majestic view of snow clad mountain can be viewed from the hilltop close by.

Durbar Square, like its counterpart in Kathmandu, is an enchanting mélange of palace buildings, artistic courtyards and graceful pagoda temples. Listed as a World Heritage Site, the former royal palace complex is the center of Patan’s religious and social life, and houses a museum containing an array of bronze statues and religious objects. There is an entrance fee of Rs. 200 per foreign visitor. One remarkable monument here is a 17th century temple dedicated to the Hindu God Krishna – Krishna Mandir built entirely of stone with rare stone carvings on its walls depicting the epic wars from Ramayana and Mahabharata. Entrance fee of Rs. 550

Mahabouddha can be reached by walking east from the southern end of Durbar Square and then turning right at the sunken water taps. This Buddhist monument is an excellent example of terra cotta art form which points to the skill of Patan’s ancient craftsmen with a variety of building styles. The 14th century monument’s obelisk-like design is also unusual in a city of pagoda roofs.. 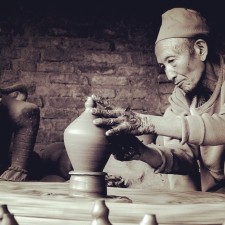 Durbar Square. As you walk in, you cannot but be overcome by a feeling of inner harmony. Such is the art and architecture and the special layout here. The Palace of 55 Windows built during the period of King Bhupatindra Malla in 1754 situated to the left as you enter through the city gate, inspires admiration. The National Art Gallery is also housed inside. The palace entrance, the Golden Gate known as Sunko Dhoka in Nepali is a masterpiece in repousse art. In front of the palace building is a medley of temples of various designs. Amongst the three Durbar Squares in the Valley, the Durbar Square in Bhaktapur is the best preserved one. There is an entrance fee of Rs. 1500 for foreign visitors.

Taumadhi Square lies to the east of Durbar Square reached by a narrow brick-paved lane. The towering five-roofed Nyatapol temple presides over the square. The monument gracefully soars into the sky atop a five-story plinth. The stairway leading up to the temple is flanked by stone figures of deities and mythical beasts, each 10 times more powerful than the one immediately below.

Enquire About The Trip

We have highly dedicated experts to assist you with your travel plan. We will make sure that your holiday will be exactly the way you want.

We are locals yet we understand the purpose behind your travel. We speak your language and we promise direct access to Nepal. You get the best and accurate information, value for your money and unmatched personalized service.

Find More About Us
Wellness Places Around
Scroll to top